Eduardo Verástegui tells us all about LITTLE BOY 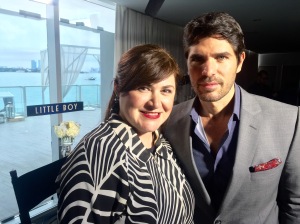 Check it out my interview with executive producer and actor Eduardo Verástegui. Eduardo tells us everything about LITTLE BOY, a powerful and moving film about a little boy who is willing to do whatever it takes to bring his dad home from World War II alive. The heartwarming story will capture your heart and lift your spirits as it reveals the indescribable love a little boy has for his father and the love a father has for his son. Set in the 1940s, LITTLE BOY is an instant cinematic classic that captures the wonder of life through the eyes of a 7-year-old little boy. LITTLE BOY features an all-star cast and crew including Oscar® nominated actors Emily Watson and Tom Wilkinson as well as Ben Chaplin, Michael Rapaport, Cary-Hiroyuki Tagawa, Ted Levine, David Henrie, Eduardo Verástegui and newcomer Jakob Salvati. Directed by Smithsonian Institute Award winning director Alejandro Monteverde (Bella) from a screenplay by Monteverde and Pepe Portillo.  Executive produced by Eduardo Verástegui, Roma Downey and Mark Burnett, Emilio Azcárraga Jean, Bernardo Gómez Martínez, Mickey O’Hare and Sean Wolfington.