The Transporter Refueled – Ed Skrein tells us all!!! 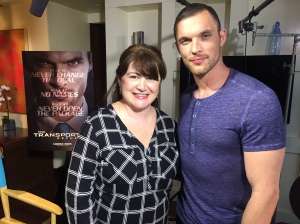 I sat down with british acor Ed Skrein who plays Frank Martin n the new  The Transporter Refueled, a fresh personification of the iconic role of Frank Martin, launching him into the present-day and reinvigorating the high-octane franchise into the next generation.Ed tells us all his experience in being in this action movie. Produced by Luc Besson, Mark Gao and Gregory Ouanhon. Directed by Camille Delamarre. The Transporter Refueled stars Ed Skrein, Loan Chabanol, Ray Stevenson, Lenn Kudrjawizki, Tatiana Pajkovic, Radivoje Bukvic, among others. Screenplay by: Luc Besson, Bill Collage, Adam Cooper and Robert Mark Kamen.

https://www.youtube.com/watch?v=A8b-HkwOscY
STORY SYNOPSIS:
Frank Martin, played by newcomer Ed Skrein, a former special-ops mercenary, is now living a less perilous life- or so he thinks- as an independent agent contracted to transport classified packages for questionable people. When Frank’s father (Ray Stevenson), pays him a visit in the south of France, their father-son bonding weekend soon takes a turn for the worst when Frank is engaged by the cunning femme-fatale, Anna (Loan Chabonal), and her three seductive sidekicks on a mission to orchestrate the bank heist of the century. Frank must use his covert expertise and knowledge of fast cars, fast driving and fast women in an attempt to outrun a sinister Russian kingpin, and worse than that, they are thrust into a dangerous game of chess with a team of gorgeous women looking for revenge.