Adventures in Babysitting available on DVD 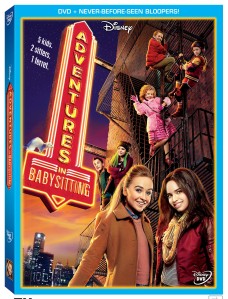 If you could not catch last week’s premiere on Disney Channel of the 100th Original Movie, Adventures in Babysitting, you can buy it today on DVD. The film, which, re-imagined tale of the popular 1980s film of the same name, stars popular actresses and recording actress Sabrina Carpenter and Sofia Carson.

In a heartfelt story that celebrates individuality, friendship and self-empowerment, the live-action adventure comedy made for kids, tweens and families, pays homage to the 1980s classic with familiar references and iconic scenes.

Adventures in Babysitting unfolds when Jenny Parker, played by Sabrina Carpenter, and Lola Perez, played by Sofia Carson, two teen girls with distinctly different personalities, each interview for a coveted photography internship and accidentally swap phones. When the Anderson family calls Jenny’s phone looking for a last-minute babysitter, audacious Lola, in need of some extra cash, picks up and nominates herself.  Meanwhile, dependable Jenny is already set to babysit the Cooper family for the evening. Unfortunately, Lola’s first attempt at babysitting takes an unforeseen turn when one of the Anderson kids sneaks out to go to a concert. Jenny, determined to protect her reputation, and Lola with the remaining kids in tow, head out and have the adventure of a lifetime during one magical night in the big city.

Aside from acting, both Carpenter and Carson perform the movie’s end credit song “Wild Side” produced by Jens Koerkemeier, Emanuel Kiriakou and Andrew Goldstein.

Adventures in Babysitting is directed by John Schultz and written by Tiffany Paulsen. The movie is executive-produced by Michelle Manning.