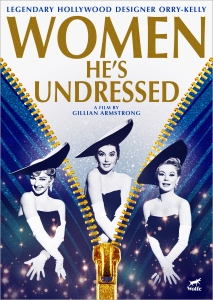 From the acclaimed Australian director Gillian Armstrong and writer Katherine Thomson, the documentary Women He’s Undressed was released today, August 9, which traces the rise and fall and rise again of one of the most prolific, and spectacularly talented costume designers of Hollywood’s golden age: legendary three-time Academy Award winner Orry-Kelly.

Following his four-decade career and dazzling creative relationships with a who’s who of Hollywood, this dishy and glamorous film – inspired by his recently published posthumous, long-lost memoir, discovered in a pillow case – unveils the secrets of one of Hollywood’s most singular and outspoken talents. Orry-Kelly was outspokenly gay at a time when Hollywood was deeply conservative.  Also, his life included a close relationship with a young British actor Archie Leach, who later changed his name to Cary Grant.

Gillian was able to mix Orry-Kelly’s life with testimonies from intimates, admirers, and Hollywood royalty to create an unforgettable portrait of one of Hollywood’s grand godfathers of glamour. Orry-Kelly worked on over three decades’ worth of classic films such as Jezebel, 42nd Street, Casablanca, Oklahoma, Some Like It Hot, An American in Paris, Voyager- just to name a few of hundreds classics more.  He dressed cinema’s greatest icons, including Marilyn Monroe, Bette Davis, Barbara Stanwyk, Rosalind Russell, and many more. He had powerful friendships with top actresses and Hollywood icons of the golden era, including Bettie Davis and Jack and Ann Warner.

WOMEN HE’S UNDRESSED is already available across all digital platforms including iTunes, Vimeo On Demand, and WolfeOnDemand.com, and also be available on DVD via Wolfe Video. The DVD contains a extra interview with director, producer and actors from re-enactment scenes.

The film also opened theatrically on July 29 in Los Angeles at the Arena Cinema in Hollywood.