Belief and suffering are the themes of The Vessel

Since September 16 in some theaters in South Florida, The Vessel (Outsider Pictures), drama with the veteran actor Martin Sheen and as executive producer, Terrence Malick. Who occupies the director’s chair is the American Cuban new upcoming director Julio Quintana. The film also marks the debut of his brother Lucas Quintana as protagonist Leo. The Vessel follows the story of a small village after a tsunami destroyed a elementary school ten years ago, located on the seafront, with all children in, and a young man builds a mysterious structure with the remains of what was left of the school.

During my phone interview with actor Lucas Quintana, he commented that it is a spiritual film, with faith, love and suffering. “The silence, the looks, the gestures are more powerful than words and talk a lot,” said Lucas, who becomes the “hope” of its neighbors after surviving a drowning, what they consider to be a “sign of God “especially, without no apparent reason, he begins to build a boat with was left of the school.

Leo, played by Lucas, with the help of Father Douglas, played by Martin Sheen, becomes a “prophet to help them overcome the loss of the children of the village,” a dilemma that drives the small town to reject the possibility that newborn come to this world as an extreme sign of mourning.

Lucas, who until now had only worked on short films, directed by his brother Julio, said Sheen encouraged to give strength to Leo through a confinement and thus left out the “fear” that some actors feel sometimes due to “the absence of dialogue” in certain scenes and characters. He said he was nervous to know that would work side by side with an award-winning, full of talented, a veteran like Martin Sheen, but some his nervousness moments disappeared through the “humility” of the experienced actor. In addition, Lucas received advice, praise, and “a good presence on the screen,” he added.

Lucas explained that the intensity of The Vessel is typical of his brother’s directing, who loves the inner drama, silent and quiet also seen in films of some directors such as the Mexican Alejandro Gonzalez Inarritu and Spanish Pedro Almodóvar. 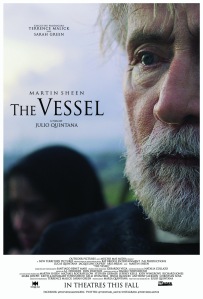 After visiting and researching different locations, including in Spain, the depressed neighborhood of La Perla, San Juan, in Puerto Rico, was chosen by Julio for filming and its characteristics have become a character in the movie as well.

“La Perla causes a feeling of melancholy, another world, very mysterious,” said the actor, who considered “the perfect location” for the film, which seemed even if a tsunami had passed around.

Speaking of Terrence Malick, director of The Thin Red Line, 1998, and The Tree of Life, 2011, acted as executive producer and thanks to Julio’s previous work with him, the young director could count on with a weight star as Martin Sheen in a low-budget film.

Malick relied on the potential and on the talent of Julio and after receiving the script he had written, the director proposed Martin Sheen to play Father Douglas.

Despite this experience, the actor and musician prefers to focus on his “greatest passion”, his studies at the Puerto Rico Conservatory of Music and continue composing music for a Latin Jazz album and Cuban rhythms that has influences like Chucho Valdés, Bebo Valdés and Michel Camilo.

In addition to Martin Sheen and Lucas Quintana, the cast includes Jacqueline Duprey, Aris Mejias, Marise Alavrez, and others.