The Accountant in theaters today!

Oscar winner Ben Affleck stars in the title role of The Accountant, from director Gavin O’Connor. The accountant tells us the story of Christian Wolff, who is a math savant with more affinity for numbers than people.  Behind the cover of a small-town CPA office, he works as a freelance accountant for some of the world’s most dangerous criminal organizations.  With the Treasury Department’s Crime Enforcement Division, run by Ray King, starting to close in, Christian takes on a legitimate client: a state-of-the-art robotics company where an accounting clerk has discovered a discrepancy involving millions of dollars.  But as Christian unfolds the books and gets closer to the truth, it is the body count that starts to rise.

Let’s find out what Ben Affleck had to say during our press conference:

What did you find the challenge of the role? Is there a connection that the big company that we see is involved with building robotics and Christina acts semi-robotic?

Ben – It was a very challenging role and it required a lot of research. Gavin O’Connor and I went around and spent time with people who are in various places on the autism spectrum and observed behaviors, talked to them, and engaged with them in everything from their day is like to what kind of movie they like to see. A lot of different responses, but the value was just in grounding the guy and making him like real people that we had seen and met in real life, rather than just an imagined version of what it might be, so it a combination of observed behavior and characteristics from people that we met and that’s where I anchored the performance in.

Do you see any connection, slightly, with your Bruce Wayne-Batman character?

Ben – I mean same chin, obviously. (He laughs.) If you stretch hard enough, you can draw parallels with a lot of different characters, but this is a distinctly unique character in a unique film. What drew me to it was Gavin and his work and the fact that it was very unusual. You think you’re getting one kind of movie and then you get something that is smarter, more interesting, more challenging and that adds thematic resonance about people who are different and what they’re capable of. It’s about how we try to protect our children from harm and some harm them more by doing so, so that’s what interested me about the movie.

Was there something particular that stuck out when you did your research, like the little mannerisms you have?

Ben – Yeah, that’s all stuff I just picked up and observed in people. There wasn’t any one person we kind of thought, “OK, we’re going to build a character on this guy.” It was more kind-of Gavin and I going through and meeting people and observing things. We’d see something that felt close to what we were doing in the movie, we’d kind-of make a note of it or just exchange a look that “this going to work for us.” We wanted to make sure that we were doing something realistic and rooted in reality. It was about putting together those behaviors and a lot of them are observed, some of them are stolen, and that’s the way you do it. 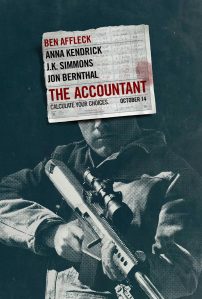 How did your Batman-Bruce Wayne training help with this role?

Ben – Gavin was really concerned that the action be real and good, something he’s done in ‘Warrior’ for example, so training was as much a part of this as the Batman movie. In fact, even more so, because it’s a lot harder for the stunt man to do your stunt when you’re not wearing a mask, so I had to brilliantly be on top of my game. I had some really great professionals who were really good at this stuff and educated me about the fighting style. It was a learning experience and I had a lot of respect for the guys who do it for a living.

Given that you’re working in the Batman franchise, is it important for you to take a complex role like this and also create one of your own in your forthcoming Live By Night, which you direct?

Ben – I’m not much of a tactician when it comes to what a career should look like. I’m not a big believer in that strategic success, the 6,000 feet sort of planning. It’s more about projects that interest me and move me. Part of  that is variation. You get bored doing the same thing over and over again. I’m lucky I get to do these three movies. You can say “Batman,” this one, which is completely different, and “Live By Night,” are completely different. It keeps me activate and engaged and hopefully doing my best work.

When your character is a child, the dad was pretty horrible. Did it make you think about parenting styles because he did it all to protect the boy?

Ben – That’s what I thought was the most heartbreaking thing about the story and definitely moving to me, as a parent. I face dilemmas, like we all do, “What’s the right way to raise children?” And every time, every little moment, there comes a crossroad. There are a lot of different parenting choices you can make and we all make mistakes, for sure, but we try our best. When you have kids, all of a sudden your heart is out of you body. All of sudden, now, you feel so vulnerable. And this fear, of your child being vulnerable, is very very powerful and I can see why it made a very interesting character for the father versus a guy who is out of love and compassion and fear for his son, actually ends up brutalizing him and abusing him and it’s really interesting to look at what’s the appropriate way to channel the intense emotions we have as parents. It’s not easy.

What did you tell your children about kids on the autism spectrum? Are they old enough to watch your films?

Ben – Yeah, my kids are old enough. They’re like, “When do you do a movie we can see?” (He laughs). They just want to know what the rating is.

As a director and as an actor, do you feel this is the most complicated movie you’ve done because the character can’t be really all on the page because of mannerism and awkwardness? Was it difficult? Did you have to work on it a long time?

Ben – Yeah, it was a lot of work because we cared about getting it right. The last thing we wanted to do was a cartoon version or a characterization, because it is a condition people really have and so the more complicated the better. It was more real. The people that we met, that we talked to, all had very complicated situations, complicated lives, some limitations, some abilities to do stuff that others were challenged with. Sometimes it would be that they’re a genius pinball player, you know what I mean? There’s an amazing spectrum of special gifts that we found. Yeah, it should feel complicated. Like you said, on the one hand you have this instinct for he does want to connect and he wants to connect very much, but some things can’t be fix and some things can’t connect in the way where he can put his arms around his woman and kiss her, but he connects with her in another way and seeing that is what, to me, is interesting about it.

Is it up there with other characters that you’ve played?

Ben – Yeah, it’s definitely the most interesting character that I’ve played, for sure. Another thing that struck me was how funny, how much wit people had who had Asperger (syndrome). There were a lot of laughs in these conversations, a lot of funny observations, and I wanted to keep that aspect of this observational detachment. I think humor is such a powerful form of intelligence, I was really moved by it, and so I wanted to try to do some of it. Walking a fine line, obviously, not funny “ha ha” funny like making fun of this character, but he is witty in the way he sees the world in his own unique way.

Can you tell us a little story about meeting the people? It must have been cool for them meeting you too. What did they want to know from you?

Ben – Most of them were wearing Batman t-shirts. (He laughs). The Batman character has a lot of fans. (He laughs.) It turns out that’s a well-known character. That was kind-of fun. I don’t think that the movie had come out yet. There were some people in the spectrum where just because of the way their social thinking works, they don’t observer the same social niceties. I remember one girl going, “I’ve never heard of you. Who are you?” (He laughs.) I got a lot of reactions, but the truth is, the biggest reaction was that people were psyched to being a part of making a movie. They were coming up with ideas for the character. I found that people really wanted to volunteer and help out. It was also educational, because I had this idea about autism as being withdrawn and these people were quite enthusiastic, engaged, and fired-up about participating, just in their own unique ways. We were surprised by the variety. The experience was really special to make the movie.

Now that you’re back with J.K. Simmons in The Justice League, what was that like for you?

Ben – It was great to work with J.K. I wish we had a chance to do more and hopefully we will in the future. It was a nice tease. It’s also really cool when you do a part of a movie, you don’t know what the actors are doing when it’s compartmentalized like this story, so it was a real treat to get to go and sit down and watch the movie for the first time and go, “Oh, that’s what they were doing.” “Jeez, I should have really brought my A-game, they’re pretty good.” It’s like sort-of seeing the special effects being put into a movie. You’re just out there with a green screen and a tennis ball and then you watch the movie and it’s like an asteroid moving towards earth or something. It was similarly, pleasantly, exiting and surprising how great these guys’ story lines in the movie were and how much it carries the film and how tight the acting is and how sharp. I was just psyched to be in a movie with them.

Have you finished shooting the gangster drama Live by Night?

Ben – Next week. We’re editing it and I’m really excited.

The Accountant is now playing!!!