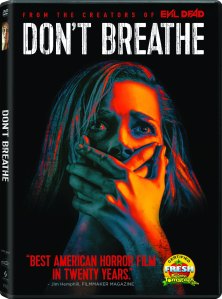 film, DON’T BREATHE, is arriving on Blu-ray™ and DVD today. The film debuted at #1 at the box office and remained in the top spot for two weekends in a row. DON’T BREATHE stars Jane Levy, Dylan Minnette, Daniel Zovatto, and Stephen Lang; and follows a group of thieves who break into a blind man’s home thinking they’ll get away with the perfect crime. When the blind man reveals a dark side, the trio quickly discovers they were dead wrong.

I had the opportunity to sit down with director Fede and screenwriter Rodo to talk about this release, the characters, future projects, and more.

The Blu-ray, DVD and digital releases come with bonus content that takes viewers behind-the-scenes of the filmmaking experience alongside the cast and crew. The discs also have five featurettes: “No Escape,” “Creating the Creepy House,” “Meet the Cast,” “Man in the Dark” and “The Sounds of Horror”;  eight deleted scenes with optional Director’s Commentary and full feature commentary with Director Fede Alvarez, Co-Writer Rodo Sayagues and Actor Stephen Lang.