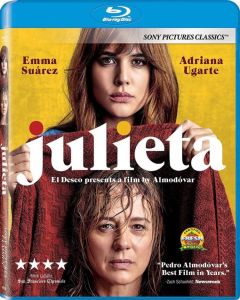 From the internationally acclaimed auteur and Academy Award winner Pedro Almodóvar comes Julieta. Pedro is back in the director’s chair for his 20th feature film and Julieta is available today, march 21 on Blu-Ray, DVD and Digital copy. Based on three short stories by Pulitzer Prize winning author Alice Munro called Chance, Soon and Silence, Julieta tells us a story about a mother’s struggle to survive uncertainty. It is also about fate, guilt complexes and that unfathomable mystery that leads us to abandon the people we love, erasing them from our lives as if they had never meant anything, as if they had never existed. Julieta has received acclaim for its rich storytelling and supreme design as well as great performances led by Adriana Ugarte, Emma Suárez and Rossy de Palma.

Julieta lives in Madrid with her daughter Antia. They are both in pain over the loss of Xoan, Antia’s father and Julieta’s husband. But sometimes grief doesn’t bring people closer, it drives them apart. When Antia turns eighteen, she abandons her mother without a word of explanation. Julieta is haunted by the mystery of this loss and it pervades everything in her life. Her struggle and obsession lead to self-discovery and surprising revelations.

Evoking such earlier Almodóvar films as High Heels and All About My Mother, Julieta reflects on the magic of chance encounters and the fragility of relationships in the face of long-buried secrets.