If you love dogs and like watching those dog shows on television, then this movie is for you! The comedy SHOW DOGS, premiering on May 18, follows an FBI agent, played by Will Arnett, and a Rottweiler police dog named Max, who need to do a job in disguise at a prestigious Dog Show where an illegal network of pet dealers is discovered.

SHOW DOGS is fun and for the whole family, full of cute puppies and animals, including a panda and a tiger. But the fun was not just on the big screen. It was transported to the press conference that took place in Hollywood on May 5, last Saturday. The press conference was so funny and so comic that we, the journalists, and the actors could not stop laughing… You may be wondering, “why was this conference different?” Typically, press conferences are held at luxurious hotel in Beverly Hills or Los Angeles, where reporters ask the questions such as “how did you get involved in this project?”,”what was your biggest challenge?”,”what can you expect from this movie?”, among others.

But this time around, those who asked the questions were the sons and daughters of the journalists attending. I can affirm, being a mom of 7-year-old boy, that the mind of a child is genius and has no filter. During the press conference, they asked whatever they wanted without the censorship of the actor’s managers or studios’ publicist. Actors Will Arnett, Natasha Lyonne and Gabriel ‘Fluffy’ Iglesias, and director Raja Gosnell answered the questions… gracefully. Let’s check out the questions and answers of this unusual press conference.

It all started with simple questions:

Kid 1 – Which dog slobbered the most?

Will Arnett – Probably Max. Mike, his handler, would have a bunch of rags and would constantly be wiping his mouth.

Natasha Lyonne – One of the world’s greatest slobberers…Max.

Lyonne – I have a maltipoo named Root Beer.

Arnett – I have a black lab named Bella.

Arnett – It makes you question everything, knowing that you’re in a conversation with the dog. You think, “what’s happening?” It’s great. There’s a lot of movie magic here. We would do scenes with the dogs and we don’t know that they’re talking to each other. We just think they are barking. I hear it as a bark, but what Raja and the filmmakers do, later on, is that they work it so that the dog is talking. People like Gabriel come in and voice the dogs you end up seeing in the movie. As you’re an actor, it is a little weird. 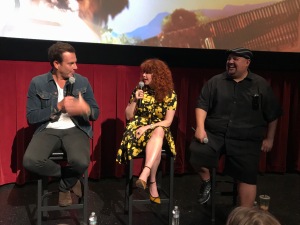 Iglesias – As a dog owner, I’m sure we’ve all had these conversations with them.

Lyonne – But it’s also your dream that your dogs could perfectly understand you – that you could have full conversations.

Until innocence comes to the fore, uncensored… and boom!!!!

Kid 4 – Are there any famous people in this movie?

Arnett – We couldn’t get any.

Lyonne – We happened to know Raja, so we went to his house.

Arnett – Is that your mom there? Have her pull up IMDB real quick. Because the tears are coming too quick [laughs].

At that moment, everyone began to laugh A LOT … and the conversation continued …

Lyonne – Kids speak the truth, Will. It’s important that we listen.

Arnett – You don’t know this, but you’ve helped me out so much. When you’re older you’re understand.

Then, it came another question directed at Will:

Kid 5 – How come you look different than on the movie poster?

Lyonne – Will, this is my favorite thing I have ever done in my entire life. You guys are perfect. Is this a roast?!

Arnett – I feel like this is set up by my therapist. Anyone else? I feel like it can’t get worse, but let’s give it a try!

Lyonne – Don’t think about the question. Just go ahead and ask it.

Until a reporter closed the press conference asking:

Reporter – How is this Q&A?

Arnett – This is one of the greatest things that’s ever happened to me. I mean that in the best way. It has re-aligned everything.